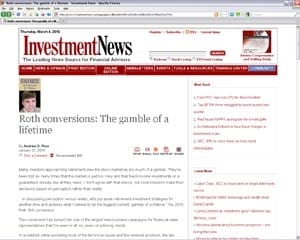 Andrew I must tell you that I really enjoyed your article. I think it’s really quite excellent and for me what I got out of it is the importance of a kind of third level of thinking. The initial thought is that it’s a no brainier to decide to convert a standard IRA to a Roth. But when you think about it more deeply and put it in context of individual financial circumstances and the what if changes in tax law and the rest, you often will come up to a different answer… So, it was an example for me and what I hope my fiduciaries are doing…

Roth Conversions – “The Gamble of a Lifetime”

A lot of investors approaching retirement view the stock market as too much of a gamble once they reach retirement age. They’ve been told so many times that the stock market is just too risky and fixed income investments or a guaranteed annuity is all they need.  Even though I don’t agree with that advice, most investors make their decisions based on perception rather than reality. So, in discussing perception vs. reality, let’s put aside retirement investment strategies for another time and address what I believe to be the biggest current “gamble of a lifetime,” the 2010 Roth IRA conversion.

This conversion has turned into one of the largest new business campaigns for financial sales people that I’ve seen in all my years of advising clients.  In a very simple nutshell while excluding most of the technical issues and the reversal provision, the law allows all traditional IRA owners to convert 100% of their IRA to a Roth IRA starting in the year 2010 without income limits and/or marriage status requirements. If converted in 2010 the taxes may be paid in 2010 or split between 2011 and 2012.  Once converted to a Roth IRA, you pay no more income taxes in future years, as the money is completely tax-free (if qualified) for life.  On the surface, that sounds great; but let’s look a little deeper.

There’s an old saying that the only sure things in life are death and taxes. As most investors are in no hurry to die, why would they be in a hurry to pay all of their IRA taxes upfront?  More importantly, why would a financial professional recommend this conversion based only on the basic assumptions that: tax rates will forever increase, Roth IRA tax laws will never change and it’s better for clients to have a converted Roth IRA than their current IRA?

I wonder if advisors who believe those assumptions to be true ever consider additional issues such as the effects of their client’s future deductions for charity, medical expenses such as long-term care, mortgage interest, property taxes, tax credits, or even the effects of the clients overall estate planning objectives?  This conversion goes deeper than just the tax effects of today. It impacts later years when there are children and even grandchildren to consider.

Let’s analyze the basic assumptions to determine if the conversion could be the “gamble of a lifetime” for your clients.

While I believe these are valid arguments against the conversion, the major reason to have an IRA versus a Roth IRA is a client’s future need for medical expenses, long-term care or assisted living coverage. The following personal example further illustrates this point.

A client of mine is now elderly and was forced to move into a long-term care (LTC) facility. Therefore,        I had to ramp up his income withdrawals to pay for his LTC costs as well as his other needs. I recommended we make all of his income withdrawals from his IRA. Previously, his income came from both IRA and non-qualified assets in order to better manage his total tax situation.

My reason for changing all his income withdrawals to his IRA was due to the known future medical expenses he would have at the LTC facility. I was able to arrange for him to use tax-deferred money instead of after-tax money to pay for those expenses. The actual medical deductions resulted in him paying roughly just 2% in taxes on all of his income.

The advantages that he and his family continue to realize from having his income source be an IRA instead of a Roth are immeasurable. The client got the benefit of contributing to the IRA at a 25% tax rate and now he’s paying an effective 2% tax rate. That’s a 23% tax savings for the client instead of the government, not counting its earnings over the last 25 years.

The same example can also be viewed as the partial funding from government tax dollars of the client’s LTC expenses. If you look at the same example, my client got the benefit of paying only 2% in taxes, meaning the government paid roughly 23% toward his LTC bills. When explained to clients and their families, that analysis is very comforting, as most of investment clients would never be eligible for Medicaid coverage once entering long-term care. Under this scenario, the client is still better off with an IRA instead of a Roth IRA.

I believe the reason many financial professionals are recommending this conversion is sales driven, rather than identifying what’s in the client’s best long-term interests. As a fiduciary, I cannot recommend that   my clients take this gamble, as there are just too many unknown variables. In my view, there are only a few cases where this gamble may be worth it. For the vast majority of clients, it’s not.

Andrew D. Rice AIF, CTS, WMS, is vice president of Money Management Services, Inc., an independent registered investment advisory firm located in Birmingham, Ala., founded in 1992, with extensive experience in managing and advising high-net worth clients. He is an Accredited Investment Fiduciary, certified tax specialist and wealth management specialist. Reach him at 205-871-7526 or via email at ricea@moneymanagementservice.com

This article was published by Investment News on January 31st, 2010.